UNDERSTOOD.ORG RESEARCH REVEALS THAT MORE THAN HALF OF AMERICANS DON'T TRUST INFORMATION ABOUT NEURODIVERGENCE THAT THEY SEE ON SOCIAL MEDIA
Continue Reading

NEW YORK, Dec. 8, 2022 /PRNewswire/ -- Understood.org — the resource for the 70 million people in the United States with learning and thinking differences like ADHD and dyslexia — today unveiled its "Neurodiversity and Social Media Study" that assesses understanding of neurodivergence and attitudes toward neurodiversity-related information on social media. The survey was conducted online on behalf of Understood.org by The Harris Poll among over 2,000 U.S. adults. 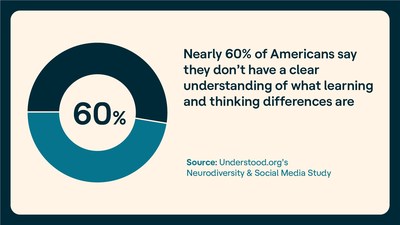 51% of Americans don't trust the information about neurodivergence that they see on social media.

"Our research found that while social media has created a groundswell of conversations around neurodiversity and provides people a place where they can connect, it's not enough," said Nathan Friedman, co-president and chief marketing officer at Understood.org. "To truly reduce stigma around learning and thinking differences and help neurodivergent individuals thrive, there's an urgent need for access to credible information and expert-backed resources."

Key results from Understood.org's "Neurodiversity and Social Media Study" include:

Awareness Around Neurodiversity Is Building, But Misconceptions Are Common

Despite growing societal awareness of diversity in the United States, the study revealed that more than half of Americans (58%) say they don't have a clear understanding of what neurodivergence is. In addition, the study found:

While the need to educate Americans around neurodiversity remains, those who need the most education are younger individuals. Despite younger generations seeming to embrace diversity and individuality more than prior generations, many still believe myths and misconceptions about people with learning and thinking differences.

Social Media Is Helping Some Americans Learn About Neurodivergence

Social media continues to be a place for people to share stories and experiences related to learning differences, which can have a positive impact on people's journeys.

Despite Conversations Around Neurodiversity on Social Media, Barriers to Action Remain

However, Americans are still skeptical of the information around neurodivergence on social platforms.

The "Neurodiversity and Social Media Study" was conducted online within the United States by The Harris Poll on behalf of Understood.org among 2,019 U.S. adults ages 18 and older. For this study, the sample data is accurate to within +/- 2.8 percentage points using a 95% confidence level. For the complete survey methodology, including weighting variables and subgroup sample sizes, please visit https://mediacenter.understood.org/research-and-surveys.

Understood.org is the resource that helps the 70 million people in the United States with learning and thinking differences anticipate the challenges, barriers, or opportunities in life and confidently reach their potential. Our mission is to shape a world for difference so that people who learn and think differently can thrive. We want to build a more equitable world where neurodiversity is championed and celebrated, and everyone can be uniquely understood. Understood.org is a 501(c)(3) organization headquartered in New York. For more information, to donate, or to partner, visit u.org/media and follow us @UnderstoodOrg.